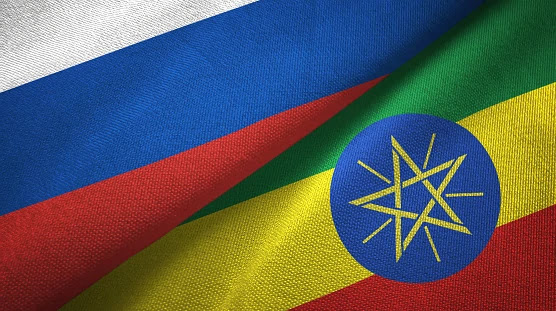 ADDIS ABABA, MARCH 10, 2022 - This morning the Russian Embassy in Addis Ababa posted on its facebook page thanking its Ethiopian friends and subscribers for the words of support it is receiving but gained backlash from German Embassy in Addis.

The Russian Embassy expressed its pride in the Ethio-Russian "solid, long-lasting, friendly ties, manifested in mutual help and assistance in times of need". It said Russia highly appreciates support from Ethiopians and for choosing to #StandwithRussia when it is fighting Nazism.

But the West, represented through German Embassy in Addis, was quick to respond to Russian Embassy's post saying Russia's intention to intervene in Ukraine was not at all about fighting Nazism. It claimed it is more familiar with Nazism although it did not mention Russia was also familiar with brutal impacts of Nazism when, during the Soviet Union, it lost millions of its people due to it. And a surge of Nazi sentiment near its borders and an oppression against citizens speaking Russian in Ukraine for the last eight years is enough a reason for Russia to intervene in Ukraine avert a catastrophe.

The German Embassy in Addis also claimed that Russia's intention in Ukraine was to fight democracy and freedom of press although again it failed to mention why its government, at the expense of freedom of press, blocked RT Television from being broadcasted in Germany.

The German Embassy in Addis again attempted to explain to Ethiopians that Russia was bombarding civilians, maternity and children's hospitals in Mariupol city, Ukraine. But it will not be easy to fool Ethiopians who recall that the German government media, Deutsche Welle (DW), falsely accused, among many accusations, the Ethiopian government for killing 56 civilians in an airstrike in January, 2022, in Tigray quoting a group dubbed a terrorist organization by the Ethiopian parliament.

It is, however, a walk in the park for most Russians and Ethiopians to decipher the fake news which falsely accuse their governments of killing civilians because killing innocents rather than combatants will not serve their purpose but on the contrary killing civilians and acting as if the opposing group did it is typical of two Western backed groups, the Nazi Ukrainian fighters and the Tigray People's Liberation Front (TPLF) terrorist group.

But at the end of the day, history undeniably has made Russia closer to Ethiopians than Germany or the West, especially the US. The latter have lost credibility among Ethiopians, if not around the world, for their hostile position towards Ethiopia during its law enforcement operation in Tigray.

Ethiopians listen to Russia not just because it helped Ethiopians defeat European colonizers 126 years ago but it was also Russia who stood by Ethiopia when the Western-backed terrorist group, TPLF, wrecked havoc in Amhara and Afar while the Western media were glorifying the terrorist group. It is also a recent memory that Germany's Deutsche Welle (DW) radio was banned in Ethiopia along with other foreign radio programs for disseminating programs that does not take into account the country's social, economic and political context.