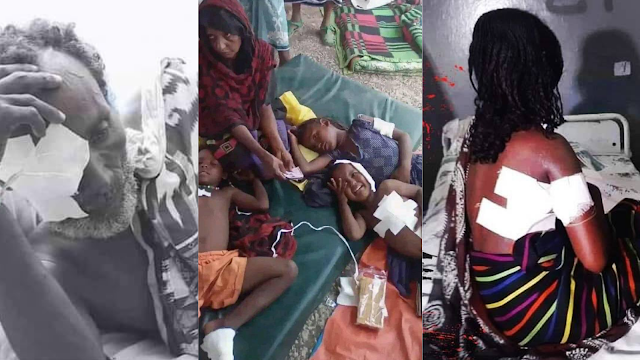 Addis Ababa, October 29, 2021 — An ongoing investigation into atrocities committed by the terrorist Tigray People's Liberation Front (TPLF) in places recently taken over by the Ethiopian National Defense Forces (ENDF) in Amhara and Afar indicate that the group has killed 483 civilians, raped 109 women and injured 166 civilians, according to the press release from the Attorney General's office of the Ministry of Justice.

Some of the rape cases the investigative report revealed were horrific acts of violence against women and girls.

15 members of the TPLF terrorist group gang raped a woman, they gang raped a seven-month pregnant woman, they raped nuns and wives of priests intending to desecrate their religious and cultural values and dignity, they raped a mother while threatening to put her eight-month old baby into boiling water. The rape victims were exposed to STDs, leaving them severely traumatized, says the report.

With regards to some of the murder and related offences which the report said were examples of exceptional cruelty were the killing of a mother and her six-month old baby while she was breastfeeding, the killing of a 30-day old infant, the killing of a 70-year old elderly, the killing of religious leaders in church and mosque compounds, a father beheaded in front of his children while they were forced to hold his legs and arms whilst the killers split his body, a husband shot in the head and his wife was then forced to stay in the same room with her husband's corpse for five days while preparing food for the killers and the massacre of displaced people sheltering in refugee camps in the dead of night while they were sleeping.
These investigations were conducted by the Federal Prosecutors and Federal Police, in collaboration with regional investigation authorities, under the auspices of the Ministry of Justice. The group completed the first phase of a joint investigation of serious crimes committed in the Amhara and Afar Regional States.
The investigations began on September 15, 2021, to look into atrocities committed following the declaration of a unilateral humanitarian ceasefire in June 2021 by the Government of Ethiopia after which TPLF terrorists launched a large-scale offensive against the regional states of Afar and Amhara, targeting civilians in gross violation of international human rights and humanitarian law, according to the report.
According to the Ministry of Justice, the scope of the investigation is limited to crimes targeting purely civilians or non-combatants and civilian objects.
The report did not include atrocities in Wollo Zone of Amhara region where TPLF still controls large portions. According to the preliminary reports, the investigations also did not include crimes committed against those who are considered hors de combat.
The places the investigation covered were from South Gonder Zone, Amhara Region, Laye Gayenet Woreda, Nefas Mewcha City Administration, Guna Begemeder Woreda, Farta Woreda, Este Woreda (partially), and parts of Debre Tabor City Administration. From North Gondar Zone, Amhara Region, Dabat, Debarq and Zarima sub-Woredas. From Afar Region, the investigations took places at Internally Displaced People (IDPs) camps in Galicoma Kebele, Uwa, Awra and Gulina woredas and Fenterus Zone.
The investigation team received statements and testimonies from 285 in North Gondar Zone, 790 victims and witnesses in South Gondar and 148 in the Afar Region.
"All three teams were also able to gather documentary evidence, circumstantial/descriptive evidence, exhibits, and technical evidence pertaining to serious crimes committed against civilians in each of the areas mentioned above", read the report from the Ministry of Justice.

Furthermore, in both Amhara and Afar regions, the report says, the TPLF committed widespread and systematic looting and destruction of public and private institutions, including schools, health posts, cooperatives, churches, mosques, and offices of non-governmental organizations. The report also said that the terrorists killed livestock destroying the livelihoods of communities.
"The terrorist group also targeted private homes, historical and religious sites, as well as the premises and properties of USAID, Action Aid, and a Chinese roadworks contractor. In some instances, the looting was supported by professional technicians who were brought in all the way from Tigray to disassemble and transport heavy machinery, indicating the premeditated, pre-planned and systematic nature of the crime," reads the first phase report.
Property worth billions of Ethiopian Birr has been looted and destroyed, according to the report, while a large number of people are displaced. More than 100,000 people are displaced in Afar region alone, while 135,310 people are displaced in North Gonder and another 47,000 in the South Gonder .
While the investigation continues, the lead investigators said, "we shall not rest until we bring the perpetrators of these heinous crimes to justice".