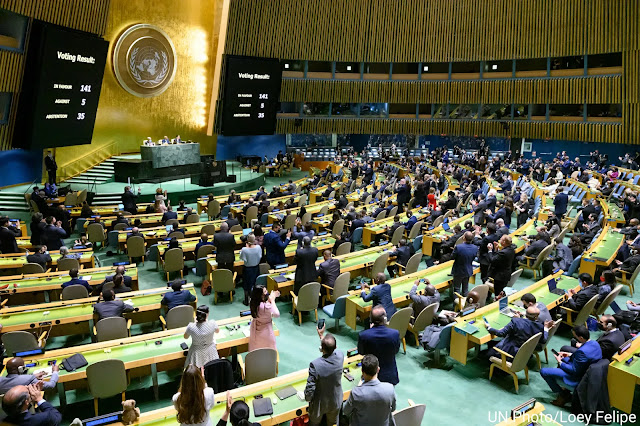 ADDIS ABABA, MARCH 03, 2022 — A day after Ethiopia skipped voting on Ukraine at the United Nation's General Assembly, Prime Minister Abiy Ahmed said that the multilateral institutions and international norms the world has built collectively need not be a site of isolation when actually they were designed to be a mechanism for problem solving, heightened diplomacy and collective development.

"Let not the failure of diplomacy be the reason millions of fives are uprooted and global shock waves felt throughout when the tools of creating international harmony are within our means", said PM Abiy Ahmed.

The West attempted to isolate Ethiopia last year just like it attempted to isolate Russia at the international arena yesterday. It is to be recalled that on December 17, 2021, the United Nations Human Rights Council (UNHRC) brought a resolution under the pressure of European countries to force Ethiopia to conduct an investigation on Tigray despite the fact that it has already conducted a joint investigation with the UN body itself. Although, African countries have either abstained or voted against the European bill, this move by the West signaled its continued influence over supposedly neutral international bodies in spite of that bloc’s gradual decline over the past decade, according to Andrew Korybko, an American political analyst based in Moscow.

Hence, Ethiopia's decision to skip the voting process on Ukraine appears to be a protest towards the UN's biased approach towards the interests of Western countries.

Other reasons Ethiopia fears the Ukraine crisis could bring is that the consequences of the war will be left for poorer countries to bear. Sanctions imposed on Russia, for instance, could affect items like wheat, fertilizer and steel. This is dangerous for a country already facing food shortages due to war and drought.

"Ethiopia has abundant lessons to share from its recent engagement in war. Our experience has shown the devastating consequence that war inflicts upon families, communities, livelihoods and the economy at large", said Prime Minister Abiy Ahmed in his today's statement.

Ethiopia closely follows the developments in Europe with great caution, he said. "We urge all parties to exercise restraint in the Ukraine crisis. We express our concern at the escalating rhetoric that risks further intensifying the issue and call upon all concerned to explore the multiple pathways to reach an understanding", he added.

"Our tragic historical past as a global community coupled with the vast leaps and advancements we have made in the 21st century beckon a more nuanced approach in our International relations and diplomacy. A zero-sum situation need not be our reality, especially when we can rely on the lessons of the past to draw us to greater heights of coexistence."