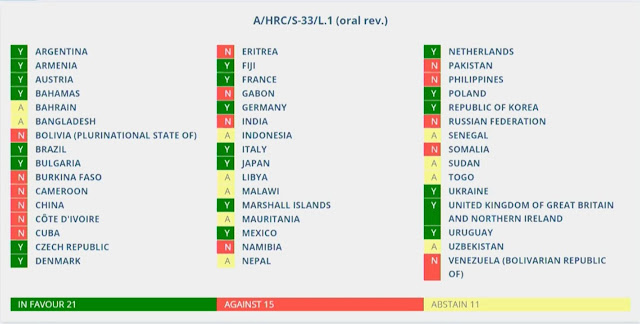 ADDIS ABABA, DECEMBER 17, 2021 — The United Nation Human Rights Council (UNHRC) adopts by vote a European Union led resolution imposing an international commission of experts on Ethiopia to conduct an investigation into allegations of human rights violations putting into question the its previous joint investigation and report that it had already adopted.

Ethiopia said, during the Council's special session, that such decision undermines the thriving national mechanism, the Ethiopian Human Rights Council (EHRC), which had recently received an "A" status by the Global Alliance of National Human Rights Institution (GANHRI).

The resolution, A/HRC/​S.33/L.1 Situation of human rights in Ethiopia, was​​ submitted by Slovenia (on behalf of the European Union) on 13 December 2021.

Ethiopia, the African Group represented by the Cameroon, China, Russia and India rejected the resolution while most of Western European member states approved the resolution.

What did Ethiopia say at the UNHRC Special Session?

This session failed to condemn this terrorist group. Ethiopia raised to the Council members TPLF’s atrocities such as pillaging, destruction, rape and use of child soldiers, commandeered more than a thousand aid trucks and used them for military purposes. It destroyed, schools, health facilities, food warehouses, industrial parks.

But the initiators of this special session would not care less. They are determined to impose their will on the government of Ethiopia. The very underhand manner this special session was initiated shows the ulterior political objective. This initiative is not helpful because why would one want to establish a concurrent body with same mandates with the joint investigation.

Is the UNHRC putting into question the report that it had already adopted or is it undermining thriving national mechanism? The answer is clear. The Council is being used as an instrument of political pressure. It is a counterproductive effort to embolden the terrorists and exacerbate the situation on the ground. Therefore, the right thing to do is to support our genuine national efforts consistent with principles of subsidiarity. As far as Ethiopia is concerned, rest assured that my government will continue to ensure accountability.

In the light of the foregoing, the Government of Ethiopia expresses its complete rejection of resolution A/HRC/S-33/L we call upon council members to We call upon Council members to firmly stand against shortsighted interest and the politicization of human rights by rejecting this resolution. Ethiopia will not cooperate with any mechanism that may be imposed on it because this is not only a deliberate destabilization efforts.

What did the African Group led by Cameroon say at the UNHRC Special Session?

We will cooperate fully with the UN mechanism. However, as regards the initiative today, namely the special session on Ethiopia, the African Group regrets that the initiatives particularly by the European partners have ignored the conditions in question, ignoring the efforts of Ethiopia. There has been a joint investigation by Ethiopia into the human rights situation. The authorities are now establishing the facts.

The African Group also regrets the indifference shown to the initiative mediation shown on the ground. In that connection, we consider that the principle of complementarity must be respected by the international community and any politicization of the investigation must be avoided likewise any maneuvers that could politicize the Council.

The Group considers the nature of the Ethiopian conflict is no less than the destabilization of a sovereign state and its democracy. We are vigorously opposed to any process that could be interpreted as leading to the fragmentation of states.

The African Group reaffirms that the process in the Council must be guided by constructive commitment without any politicization. And we call on the initiators of the initiative to reconsider it in the interest of Ethiopia’s peace and stability.

In conclusion, we consider that actions established on those mechanisms is counterproductive. And we call on the members of the Council to reject it.

What did China say at the UNHRC Special Session?

China has always supported solving African issues in African ways. We welcome the political mediation of High Representative Obasanjo. The international community should provide a constructive help to Ethiopia.

The work of the UNHRC should follow the principles of impartiality, objectivity and non-politicization and non-selectivity. The relevant countries ignored Ethiopia's opposition and showed no respect for the mediation efforts of African countries forced through a special session of the UNHRC and proposed to establish a mechanism counter specific to Ethiopia. This attempts interfere in Ethiopia's affairs undermine its sovereignty and territorial integrity and fully intensifies contradictions and complicated factors to the situation. This is contrary to the purpose of the UNHRC.

We are seriously concerned about the behavior of relevant countries and urge them to immediately stop their wrong practices.

China believes that Ethiopian people have the capacity and wisdom to overcome current challenges, maintain national unity and bring the country to correct track of peace, stability development and revitalization. China is ready to work with the international community in support of the efforts of the Ethiopian people.

What did the Russian Federation say at the UNHRC Special Session?

Russia confirms its commitment to the sovereignty, territorial integrity and independence. The situation in Ethiopia remains complex. A political solution without a ceasefire is in principle impossible. However, Russia consistently opposes the politicization of the Ethiopian question in the Human Rights Council. The ongoing emphasis on this topic in the Council is counterproductive. In reality, it does not facilitate a resolution of the political and military crisis in the country. We believe the creation in the Human Rights Council of an additional fact finding mechanism on Ethiopia is superfluous.

The Government of Ethiopia is successfully cooperating with international human rights mechanisms. This can be seen from the professional, impartial work of the national Human Rights Commission, whose activities are fully in keeping with the Paris Principles and have an “A” status.

We believe in the principles “African problems need African solutions”. Thus we support the mediation efforts of the African Union. We consistently reject any imposition of unilateral approaches.

In the Ethiopian case, we note, an obviously, politically motivated decisions by certain states. We believe that the ongoing practice of creating monitoring mechanisms without the agreement of the concerned countries is doomed to fail. Any experts appointed will not be able to work on the ground. Their reports would consist of one-sided information obtained from dubious source or from the internet.

What did India say?

We call upon all stakeholders to seize the opportunity provided by the AU purposefully. The political and economic stability is paramount not just for HoA but the entire African continent.

It is our interest that the current political and military situation is resolved within the constitutional framework of Ethiopia. We encourage African solutions to African problems.

In conclusion, India reiterates its strong commitment to the unity, sovereignty and independence and territorial integrity of Ethiopia. India also supports various steps taken by the government of Ethiopia to resolve the conflict and to address the humanitarian and human rights situations.