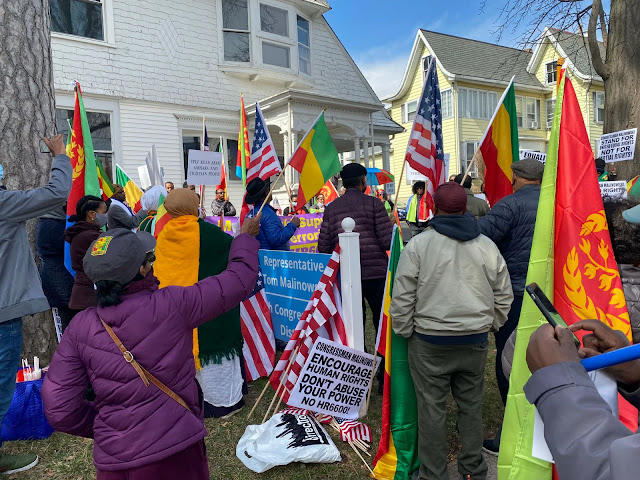 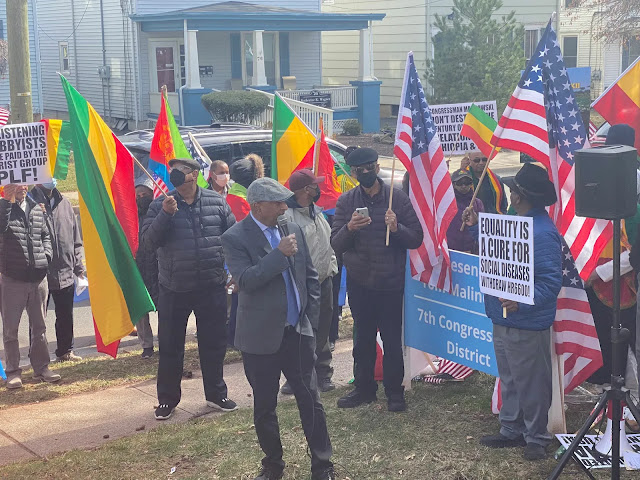 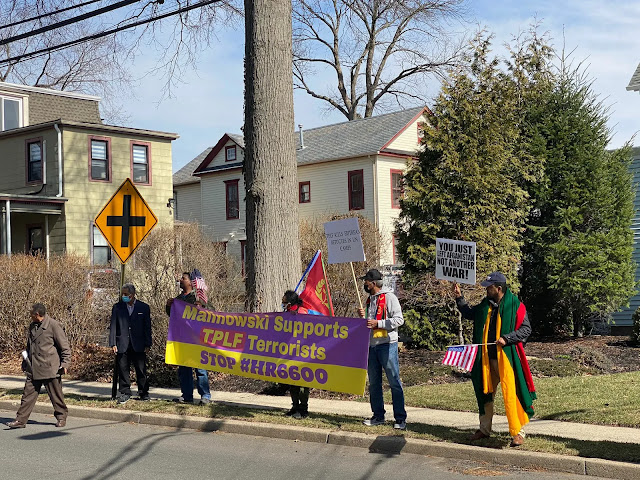 Simultaneous to the protest, an airplane banner flew over Congressman Malinowski’s district to raise awareness of the harmful impact of this bill and how it provides support to the TPLF.

The American Ethiopian Community are considering organising against the Democratic Congressman as he battles a wafer-thin majority at the mid-terms in the 7th district of New Jersey.

On November 4, 2020, TPLF forces attacked a government military base in the northern Ethiopian region of Tigray, kicking off what has become known as the Tigray Conflict. Over the past year, the TPLF has continued its violent military campaign into the neighbouring Afar and Amhara regions, upending the lives of millions of Ethiopians.

The fourteen-month conflict has started to ease following a counter-offensive by government forces which aborted the TPLF’s march on Addis Ababa and their occupation of Afar and Amhara.

Following the TPLF’s defeat and withdrawal to Tigray, the Ethiopian Government has taken significant steps toward peace including halting armed operations at the borders of Tigray, offering amnesty for several TPLF leaders and creating a national dialogue to help secure lasting peace for the country. 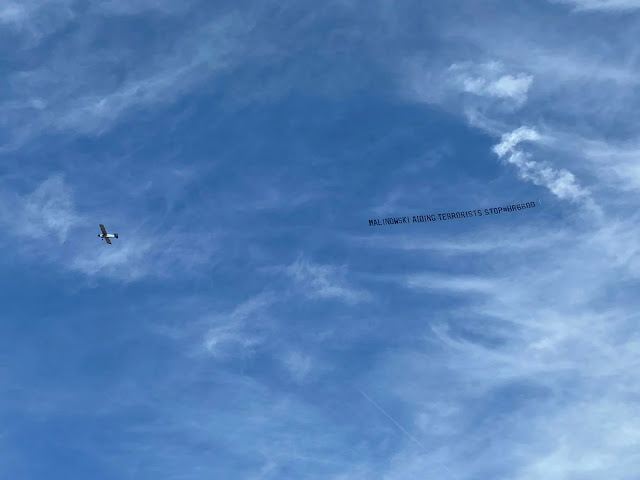 The Bill introduced by Congressman Malinowski, HR6600 the Ethiopia Stabilization, Peace, and Democracy Act, would deploy wide ranging sanctions against Ethiopia including blocking the country from critical aid and investment from the IMF, World Bank and the U.S. itself, has been met with anger from the Ethiopian diaspora.

Since its introduction the Congressman has faced overwhelming opposition from the Ethiopian American community in his district and across the country.

The aim of the protest was to highlight the progress that has been made and challenge the need for this Bill. Moreover, Ethiopian community leaders want to increase awareness of the impact Malinowski’s Bill will have on the poorest in the country.

“The Bill is nothing short of an attack on Ethiopia and its people which at the same time undermines the over 100 years US-Ethiopia relationship. As Ethiopia starts on its journey to peace after more than a year of conflict, Representative Malinowski wants to cripple Ethiopia’s economy and fuel tensions. Many of the actions the bill requests of Ethiopia from an amnesty for prisoners to the formation of a national dialogue are already in progress. The one-million strong Ethiopian American community will have our voices heard. We will do all we can to oppose this Bill and we call on friends of Ethiopia to support our campaign.”

Notes to Editors
Representative Malinowski’s Bill was published on the 4th February 2022, a copy can be found here: https://docs.house.gov/meetings/FA/FA00/20220208/114384/BILLS-117HR--ih.pdf
The Bill was considered by the House Foreign Affairs Committee on 8th February 2022

The American-Ethiopian Public Affairs Committee is dedicated to promoting a positive, synergetic relationship between the United States and Ethiopia. AEPAC’s core mission is to strengthen and enhance the century-old relationship between the United States and Ethiopia. AEPAC strives to build a strong partnership based on the common interests and mutual benefits of the two countries. More information on AEPAC's work can be found here: https://aepact.org/