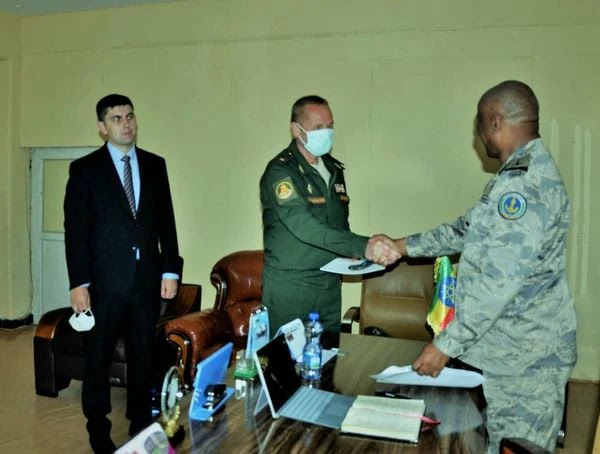 Ethiopia's Chief of Naval Command, Commodore Walatsa Wacha, explained to the Russian Navy delegation that Ethiopian Navy was established three years ago and that they are working to build a strong and trained naval operations team capable of defending threats and further enhancing the military might of the Horn of African nation.

According to the report from ENDF, the objective of the visit from the Russian Navy delegation is to strengthen the already thriving diplomatic relations between the governments of Ethiopia and Russia.

He also said that an agreement has been reached with the Russian Navy to collaborate in various fields of training so that Ethiopia can unlock its potential in becoming a competing naval force in the Red Sea.

In 2019, France had signed an accord to assist Ethiopia in building its navy. However, France abandoned this agreement in August 2021.

Although, Ethiopia is landlocked and without a coastline, there are reports indicating that Ethiopian Navy could be placed at either Djibouti, Assab (Eritrea) or Berbera. But a source following the case told the Capital newspaper, 2019, that the government has decided to locate its initial base at Djibouti.

Ethiopia acquired a coastline and ports on the Red Sea in 1950 when the United Nations decided to federate Eritrea with Ethiopia. In 1955, the Imperial Ethiopian Navy was founded, and its first (and primary) base — the Haile Selassie I Naval Base — was established at Massawa in 1956. The navy took delivery of its first ship in 1957. By the early 1960s workshops and other facilities were under construction at Massawa to give it complete naval base capabilities.

In 1958, the navy became a fully independent service, organized as one of the three Ethiopian armed services – alongside the Ethiopian Army and Ethiopian Air Force – under the overall command of the Chief of Staff of the Imperial Armed Forces. The navy's deputy commander had his naval headquarters in Addis Ababa. The navy was conceived and built as a coastal navy for patrolling the Red Sea coast.

It was in 1996 that the Ethiopian Navy's headquarters in Addis Ababa was disbanded after Eritrea broke away with the coastlines in 1991. For few years the Navy rented a harbor in Djibouti but it was unable to continue paying its harbor dues and thus the Ethiopian Navy ceased to exist.