#NoMore Stands Unified Against HR 6600 and US Aggression Toward Ethiopia, Eritrea and Somalia 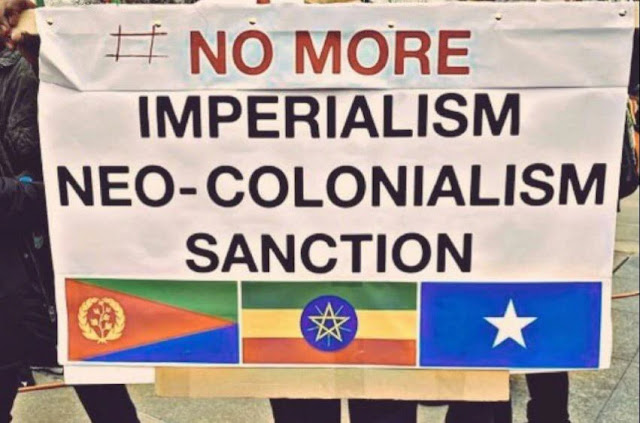 ADDIS ABABA, FEBRUARY 13, 2022 — On Tuesday, the United States (U.S.) House Foreign Affairs Committee passed a bill introduced by Representatives Tom Malinowski (D-NJ) and Young Kim (R-CA) that requires the Biden administration to take additional measures against Ethiopia and Eritrea for the war Northern Tigray perpetrated by the infamous Tigray People's Liberation Front (TPLF), a terrorist designated group by the Ethiopian parliament in May 2021.

The bill dubbed "Ethiopia Stabilization, Peace and Democracy Act" would sanction individuals as well as suspend U.S. security and financial assistance to the Ethiopian government. It would also prevent Ethiopia and Eritrea from getting loans from international agencies such as the World Bank and International Monetary Fund.

The global NoMore Movement has denounced in a statement the new U.S. sanctions as a hostile attempt by the U.S. to intervene not just on the ongoing conflict in Ethiopia but also the whole of East Africa.

"The No More Movement, a peaceful movement, condemns in the strongest terms possible the bill passed by the House Foreign Affairs Committee that was introduced by US Representatives Tom Malinowski (D-NJ-07) and Young Kim (R-CA-39), which calls for hostile US intervention in the ongoing conflict in Ethiopia.

Branded with the Orwellian title of "Ethiopia Stabilization, Peace and Democracy Act" (HR 6600), the bill, which was co-sponsored by Ranking Member Michael McCaul (R-TX-10), Chair Gregory Meeks (D-NY-05), Brad Sherman (D-CA-30) and David Cicilline (D-RI-01), calls for the imposition of harsh sanctions and violent measures against the peoples, governments and diasporas of the Horn of Africa, falling within the category of a "foreign person", who supposedly "undermines" efforts for a negotiated settlement.

It is not lost on the peoples of the Horn of Africa that, on the same day that US Congress advanced HR 6600, the State Department also issued a press release announcing restrictions on issuing visas to Somalis "who are believed to be responsible for, or complicit in, undermining the democratic process in Somalia" (Press Statement: Promoting Sustainable Peace and Responsive Governance in Somalia, February 8, 2022).

Hence, it appears that both the executive and legislative branches of the US government, which are currently under the control of the Democratic Party, are taking hostile, counterproductive and punitive measures against all peoples of the Horn of Africa who they subjectively believe are "undermining" their failed policies in the Horn of Africa region.

The Tigrayan People's Liberation Front (TPLF), designated a Tier III terrorist organization by the US Department of Homeland Security, started the war in Ethiopia and fired a barrage of missiles on Eritrea in November 2020, which are historical facts that the Biden Administration and the sponsors of HR 6600 fail to acknowledge.

Furthermore, the Ethiopian government's call for a ceasefire in June 2021 was not only ignored by TPLF but triggered the terrorist group to recruit Tigrayan child soldiers and go on offensives in the Afar and Amhara regions, killing thousands of innocent civilians, displacing hundreds of thousands more, using rape as a weapon of war and intentionally destroying infrastructure that includes over 3,000 hospitals. TPLF also emboldened the allied Oromo Liberation Army to carry out targeted mass killings of Amhara civilians in Western Ethiopia.

The US government remains silent as well as complicit in the TPLF’s ongoing war crimes against these innocent civilians. Instead of condemning TPLF, the US has scapegoated the Eritrean government and Eritrea, which is explicitly mentioned in the bill and already the victim of vicious economic sanctions. Let it be recalled that the AU Assembly during its 35th session explicitly condemned “sanctions and unilateral coercive measures” against African countries and reaffirmed “its solidarity with the People of Zimbabwe, South Sudan and Eritrea”.

The peoples and governments of Ethiopia, Eritrea and Somalia have a right to defend their nations against terror by TPLF and other armed groups. They have a right to pursue their own political vision for the Horn of Africa that they believe will bring greater collective peace, prosperity and progress to the region. They also have a right to reject pressure to negotiate with a terrorist force that has repeatedly violated peace deals with US complicity and encouragement (e.g. 2000 Algiers Agreement). Such a rejection does not "undermine" stability, peace or democracy but instead upholds these cherished values.

Challenging or disagreeing with bad US policies, especially when doing so is in the interest of the American people and the people of the Horn of Africa, should not be grounds for unilateral sanctions. Such imperious measures are seen by the No More Movement as overt threats and acts of intimidation designed to force compliance towards a singular vision of the Horn of Africa. These measures are also seen as misguided in the irrational belief that they will consummate their issuers' stated or unstated goals as well as desperate since they come from a position of weakness rather than strength.

The bill explicitly mentions the governments of Ethiopia and Eritrea and calls for the US government to restrict developmental aid, restrict the issuance of visas, "combat hate speech and disinformation" in coordination with private social media companies, designate actors guilty of "genocide" and "address threats…against Ethiopian citizens working for United States Government agencies in Ethiopia." Notably, these proposed sanctions, which follow successive, failed multilateral sanction attempts within the halls of the UN Security Council, are deceptively framed as "bilateral" (or "multilateral") within the bill's legal language despite its calling for their issuance by the US president alone. This well-known tactic of hiding unilateral imposition is used to absolve the US of responsibility since no single country can be held responsible for the murderous effect of the sanctions.

Let it be known to Representatives Malinowski, Kim, McCaul, Meeks, Sherman and Cicilline and the State Department and its leader Secretary Anthony Blinken that the popular and peaceful No More Movement, without flinching, stands united and ready to stiffly resist and mobilize the global masses against these recent acts of hostility towards the peoples and governments of the Horn of Africa.

Absent any corrective measures, the millions of adherents of the No More Movement, concentrated in strategic urban centers across the US, plan to mobilize US citizens to the maximum possible extent to remove from office all sponsors of HR 6600 and exercise their democratic rights against all parties that openly or tacitly endorse the deadly neocolonial actions of the Biden Administration against the people of the Horn of Africa.

We hope US officials involved in forwarding the recent hostile measures against the Horn of Africa will reverse course and pursue corrective measures in the interest of US and African citizens alike."