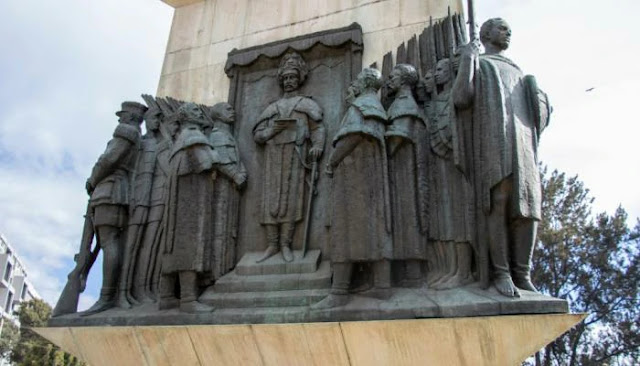 The Italians who were defeated in 1896 at the Battle of Adwa held a 40 year grudge and launched a second invasion on Ethiopia in 1935 as per the orders of the fascist leader Benito Mussolini. Although Italy was successful at defeating the ill equipped Ethiopians with its war planes spraying chemical weapons indiscriminately, it did not succeed in breaking the spirit of the Ethiopian resistance or in fact inspired the formation of movements such as the Black Lion anti-fascist resistance movement. The Italian occupation, which had little control on swathes of Ethiopian land, only lasted for five years.

85 years later, today, Ethiopia recounts Yekatit 12 (February 19) or the Martyrs' Day remembering those who were massacred on the streets of Addis Ababa.

"Even though the enemy's punishment was to discourage Ethiopians, once and for all, from seeking their freedom, the result brought the opposite effect. It made Ethiopians even more resolute to fight for their freedom.", said the Ethiopian government in a statement released today.

It said Ethiopians when attacked come together in wholesome just like a swarm of bees and they never make life easy for the enemy.

"This common value of Ethiopians will always remain a riddle to the enemy. Yekatit 12 (February 19) can also be our source of unity to rid off our multi-sectoral enemies and attain prosperity. Yekatit 12 (February 19) is a testament that Ethiopia is a country that has remained resilient through the martyrdom of its citizens", read the statement from the Ministry of Government Communication Services.