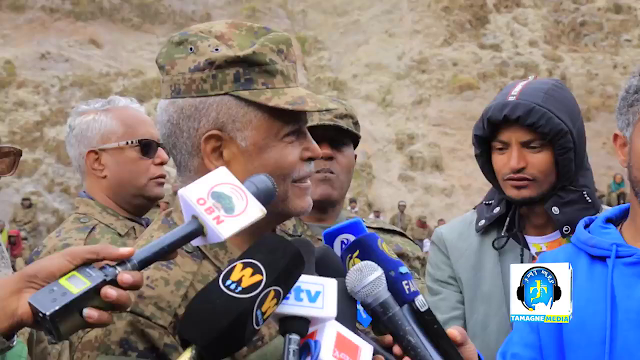 ADDIS ABABA, NOVEMBER 29, 2021 — Andargachew Tsige, one of Ethiopia's prominent opposition figures, said to a group of members of the Ethiopian National Defense Forces (ENDF) that they should resist with ferocity and with all their might the Tigray People's Liberation Front (TPLF) which has killed and robbed Ethiopia for over 30 years and yet it does not feel satiated.

"Young men like you didn’t seek to come here. You were forced to be here. It was TPLF that forced you to be here.", said Andargachew Tsige inspiring young members of the ENDF at the Wollo Front.

"It [TPLF] was granted mercy by the people, by the government and by you. But it said 'no'. It wanted to eat us as it was used to, pull out our nails, torture us or die trying.", said the veteran opposition figure who was once put on death row by TPLF led government until Prime Minister Abiy Ahmed came and pardoned him.

This is an enemy that is willing to destroy us even if it had to do it in hell, said Andargachew. "It is raping women as old as your grandmothers. It is raping children and your sisters", he added.

"The enemy we are facing does not need our compassion. But I know you are raised with compassionate parents. I know you stand for the good of humanity because you are compassionate. But the enemy does not deserve your compassion or your mercy. We must resist with ferocity and eliminate the enemy", said Andargachew Tsige.

Although most Ethiopians believe Andargachew's words to be inspirational, enough to uplift one to resist the invading enemy, the West's media was quick enough twist his words as implying "genocide against Tigrayans".

UK's Telegraph released an article written by the TPLF sympathetic journalist Will Brown with the title "Briton released from death row accused of inciting genocide in Ethiopia".

The article claimed that Andargachew Tsige was advocating to inflict the "most barbaric of cruelties" against Tigrayan civilians. But this is far from the truth. The Telegraph is yet again engaged in a narrative that is intended to create a monstrous image of Ethiopians, their government and their defense force.

The EthiopianCitizen translated the speech of Andargachew Tsige into English so that it will be clear to all that what he said is no different to what Mel Gibson (William Wallace) uttered in the movie Braveheart calling on his people to fight.

Gibson's words were not taken as call to exterminate the English but as inspiration for the Scots to defend their homes, their women and children against an oppressive forces. The same ho for Andargachew who wanted nothing but freedom for Ethiopians which he fought all his life and almost costed him his life when he sentenced to death.

For the Telegraph, Ethiopians defending their homes is seen as an act of barbarism. However, this is not the first time it perverted the words of an Ethiopian public figure.

In late October, the UK's newspaper also made the same perversion to the words of Ethiopia's Prime Minister. When PM Abiy Ahmed said he wanted to reduce dependency on imported wheat, the Telegraph said "Ethiopian PM Threatens To Stop Food Aid Entering The Country".

Nevertheless, Ethiopians are increasingly understanding and are taking note of the coordinated hybrid war waged against their country by Western powers and their so-called independent institutions. Their actions is increasingly forcing, the once darling of the West, to become the most hostile.