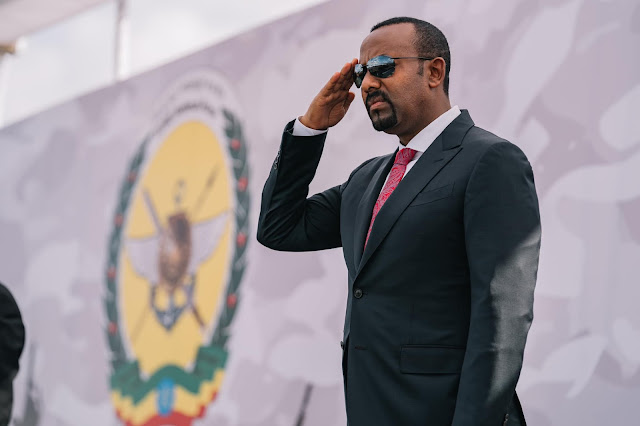 ADDIS ABABA, JANUARY 09, 2022 — During the inauguration of the lavish state of the art Ministry of Defense building on Sunday, Prime Minister Abiy Ahmed awarded members of the Ethiopian National Defense Forces (ENDF) for their bravery but he also explained the government's controversial decision to release the members of the Tigray People's Liberation Front (TPLF) including the founding father Sibhat Nega.

Many Ethiopians were shocked and angered at the government's decision to release men who have caused so much pain among many.

Prime Minister Abiy in response said there were two groups of people who expressed their anger.

He said the first ones are those who dislike it when Ethiopia is calm. He said these were the ones who profit from the war and they were the ones who were superficially calling for the war to end and when the war was stopped, he said, they change their opinion and want the war to be started. The Prime Minister said these are the tricksters the government will not listen to.

The second group, he said, were shocked by the sudden news. These group invested its time, money and went to frontline to defend the nation. This group, said PM Abiy, hates the enemy and any associated conversation with the enemy. This group is sincere and the government is willing to listen to it and it will ensure that it understands the decision, added PM Abiy.

"What we want our brothers and sisters to understand is that we were also shocked when we first heard about this. But after taking time to understand the situation, it is a decision that will bring sustainable benefits to Ethiopia, diminish Ethiopia's numerous enemies. It is a decision that will guarantee us victory outside of the battlefront. This is the truth and we accept it despite its bitterness. And I humbly call upon you to think thoroughly and accept this decision for the sake of your country's sustainable victory and dignity", pleaded Prime Minister Abiy Ahmed to citizens who were disappointed.

"We do not want the elderly to die in prison. We are gallant men. We allow the elderly to spend their last days at the monastery or at home but not in confinement", added the Prime Minister.

PM Abiy Ahmed also said the government has no doubt that this decision will not only complete Ethiopia's unity but also in the long run it will make our children proud.

The Prime Minister posed a rhetoric question if amnesty would have been possible, had the TPLF succeeded in capturing Addis Ababa. He said granting mercy is associated with being the victor while receiving mercy is not just a sign of defeat but also a sign that the granter is noble.

"God gave us victory not to get intoxicated with it but to grant mercy with it. But God is aware that had our enemies won they would dismantle Ethiopia without mercy. We thank our God for making us the brave, the victor and the merciful", said Prime Minister Abiy Ahmed.

"The one who forgives is one who lets go despite his capability to avenge, to arrest or to kill. We must be aware that we have forgiven even though we are capable", warned the Prime Minister.

He said he does not want his government to take over the wicked nature of the enemy which is to steal, to kill and pronounce the destruction of ones country in public.

Nevertheless, the opposition Ethiopian Citizens for Social Justice Party criticized the government's decision saying that Ethiopians do not need to be preached about the virtues of mercy and forgiveness which are embedded in the daily Ethiopian norms and traditions.

"On January 07, 2022, the people who were granted amnesty were the cause of many deaths and their release comes at a time the wounds of many have not fully healed and the ransacked places have not yet recovered. Even before the war began, there were forces who discriminated and alienated our people", read the statement from Ethiopian Citizens for Social Justice Party.

"Remorse precedes mercy while justice is a contract that guarantees our collective survival. To release an offender without justice or without compensating the victim is a joke made on the justice system and it trivializes the pain of our people. These kinds of decisions made in haste will not only suppress justice but also erodes our trust in it", added the opposition party.

The party also called on Ethiopians to standby their country and not be discouraged by mistakes made by the government. It said the country is still under deadlock and it needs all the help it can get to rebuild what has been lost from the war.

"Dear Ethiopians, this is not the time to be fatigued. It is a time to unite and strengthen our will. We are in the middle of the problem. There is much work ahead of us. There are a lot of compromises to be made. If we are to build a nation where we will no more kill one another, it is a must to learn to challenge with ideas. All the ideas in the country must come to the table. No one must be left out of this process. In order to hand over a life better than ours to the next generation, our struggle and our debates become vital", said Ethiopian Citizens for Social Justice Party in a statement.