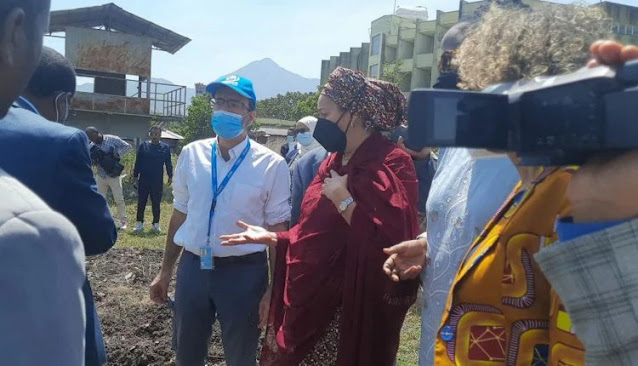 ADDIS ABABA, FEBRUARY, 06, 2022 — Deputy Secretary-General of the United Nations, Amina J. Mohammed, along with her envoy, met with women who were raped by Tigray forces and also visited mass graves in the ransacked town of Kombolcha.

After participating in the 35th African Union Assembly, the Deputy Secretary-General traveled 370 KMs North of Ethiopia's capital, Addis Ababa, to witness and talk with people who were victimized during the TPLF terrorist invasion in early November 2021.

She talked with women who were victims of rape and children who were left orphans as a result of the terrorists atrocities in the town. She also paid a visit to Kombolcha Polytechnic College which was looted and ransacked. It was also in the college that she witnessed the mass grave left by the Tigray based terror group when it had occupied the town.

With regards to the damages caused in other places, she was briefed with photographs that demonstrate the extent of atrocities committed by the Tigray People's Liberation Front (TPLF), according to the deputy administrator of Amhara Regional State, Dr. Getachew Jember.

Dr. Abdu Hussein, Governor of South Wollo Zone, Amhara region, also said that the Tigray forces looted the Kombolcha Poly Technic College when it was in the process of transformation to become a Center of Excellence not just for the country but for the whole African continent.

It was also reported that Amina Mohammed, Deputy Secretary General of the UN, will also be visiting Tigray in the coming days and after which she will be releasing a statement on her visit.