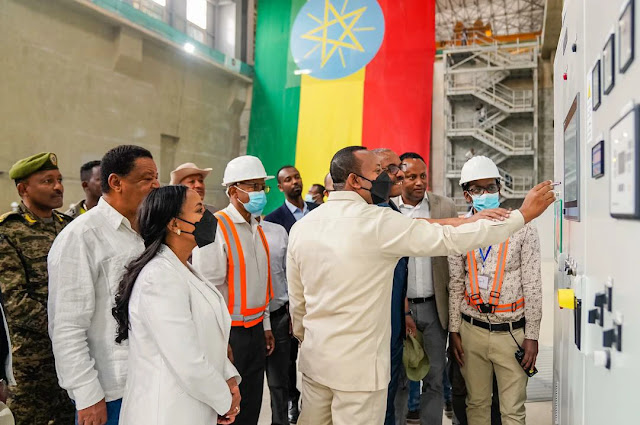 "Water, as usual, is flowing to Sudan and Egypt while simultaneously generating power for the Ethiopian people who do not want to see the people of Sudan and Egypt suffer", said Prime Minister Abiy Ahmed.

The GERD, which is fully financed by Ethiopians and currently at 84% completion generates 375 megawatts, is expected to generate over 5,150 megawatts or 5,750 GWh of electricity annually which will double Ethiopia's electricity output when it is fully completed.

He said the start of the GERD producing power is a good news for the African continent and for those of in the lower riparian countries.

Ethiopia has no intention to harm anyone, said the Ethiopian Prime Minister and stressed that the country's need is to use the power to poverty alleviation and provide electricity to its large population, 60% of which are still without electricity.

Prime Minister Abiy Ahmed acknowledged the initiation of his predecessors such Emperor Haileselassie I who, he said, prepared the design and Meles Zenawi who started the construction of the GERD.

"Although it was difficult to execute it at his time, Emperor Haileselassie had a wish to preserve a noble idea to his children. He knew the next generation would execute it. He ordered the design of this project with the hope that the next generation will build it. He deserves respect and appreciation for his great dream has been turned into a reality through his children", said Prime Minister Abiy Ahmed.

"The son of Emperor Haileselassie and the one who represented the next generation, Meles Zenawi laid the foundation for this project knowing that the time is ripe for Ethiopia to pursue this project. Although during his time the project has not progressed, he knew that those succeeding him will complete it. And for this he deserves respect and appreciation", said the Ethiopian Prime Minister.

He also thanked former Prime Minister Hailemariam Desalegn who, he said, took over the project while it was at its infant stage and managed to advance it despite the nationwide turmoil that his administration was facing at the time.

"We are not the ones who started this. We are only the ones who finished it. It is, therefore, important for our future work to thank those who made the initiation", said PM Abiy Ahmed.

Prime Minister Abiy Ahmed further explained Ethiopia’s desire to go beyond producing power at home or use it just to benefit neighboring countries, but also to export power to Europe so as to reduce gas emissions that negatively affects the environment.

"Egypt has a power grid that crosses the Mediterranean Sea connects with European countries. Since it is easy to connect the grid from Sudan to Egypt, we can work on additional power generation projects and help to reduce the greenhouse gas emissions in Europe. So we have the desire to export energy from Ethiopia to Europe", said Prime Minister Abiy Ahmed.

This is not a wishful thinking, said the PM, adding that the country has high amount of rainfall and many rivers that will enable it to build more dams and benefit other countries.

Ethiopia's Prime Minister had requested the West to cooperate with Ethiopia in financing and building new projects by shifting the existing water politics in a way that ensures mutual benefits for all.

He also called on African nations to follow the footsteps of Ethiopia and work to break out of aid dependency.