ADDIS ABABA, DECEMBER 06, 2021 – Ethiopia has announced the #GreatEthiopianHomeComing challenge to its diaspora community to return home for Ethiopian Christmas in millions in the in hopes of recovering the tourism sector which has suffered steep decline by COVID-19 and the war provoked by the Tigray People’s Liberation Front (TPLF).

Due to the TPLF led war, Ethiopia has lost almost a quarter of a million USD just from the Simein Mountains Park,Amhara region, only and the community in the region that relied on tourism for livelihood has lost more than half a million USD, according to the Ministry of Government Communication Services (GCS).

Ethiopia’s international tourist arrival almost hit a million mark in 2017 only to decline due to the popular protest that deposed the tyrannical TPLF regime and ushered in the more progressive Prosperity Party (PP) led by Prime Minister Abiy Ahmed.

In the spite of the changes, tourism sector could not recover quickly as the country was facing various threats from the TPLF which sponsored violence in different parts of the country.

In 2020, due COVID-19 the tourism sector was hit hard globally and in the same year TPLF provoked a war with Ethiopia by attacking Ethiopian National Defense Forces (ENDF) Northern Command in Tigray.

Although most of the conflict remained in Northern part of Ethiopia for about a year now, the tourism sector still could not recover quickly due to the coordinated disinformation campaigns waged against Ethiopia by the international mainstream media which dislodged a narration which painted Ethiopia was collapsing. This has caused a negative image towards Ethiopia in the western world and hence affecting tourism.

In addition, the United States (US) Embassy and other western embassies were engaged in recent weeks spreading fear within the diplomatic community in Ethiopia releasing statements that affect not just Ethiopia’s tourism income but negatively affecting the entire economy. Although, all of these disinformation campaigns were proved to be false, the fear still looms large.

Ethiopia has, therefore, stretched its hands forth towards its diaspora community throughout the world, who have been tirelessly fighting for Ethiopia’s cause saying #NoMore, to help it rebuild the nation's economy. 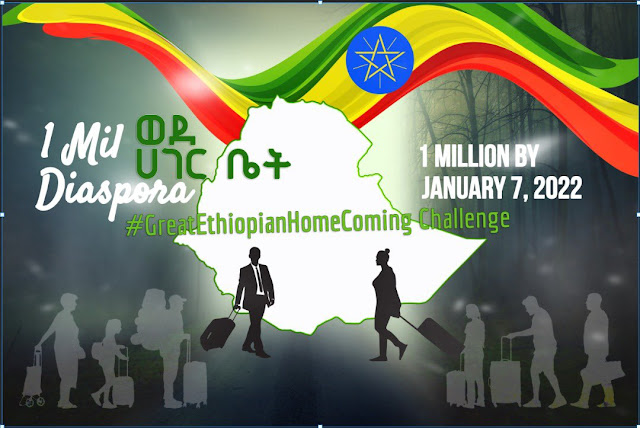 In the upcoming Ethiopian Christmas, January 07, 2022, Ethiopia’s Prime Minister has called on all Ethiopians and friends of Ethiopia around the world to celebrate Christmas at home.

The Ethiopian Airlines has also said that it will offer a 30% discount to those who participate in the #GreatEthiopianHomeComing challenge and those who book their flights from today until December the 20th 2021 for travel from 01 to 31 January 2022.

COVID-19, TPLF's war, US' sanctions and fearmongering and the mainstream media disinformation war have all but caused damage to Ethiopia's economy. But Ethiopia is harnessing its powers that has helped it remain resilient for thousands of years. And these powers lies in its people staying united.